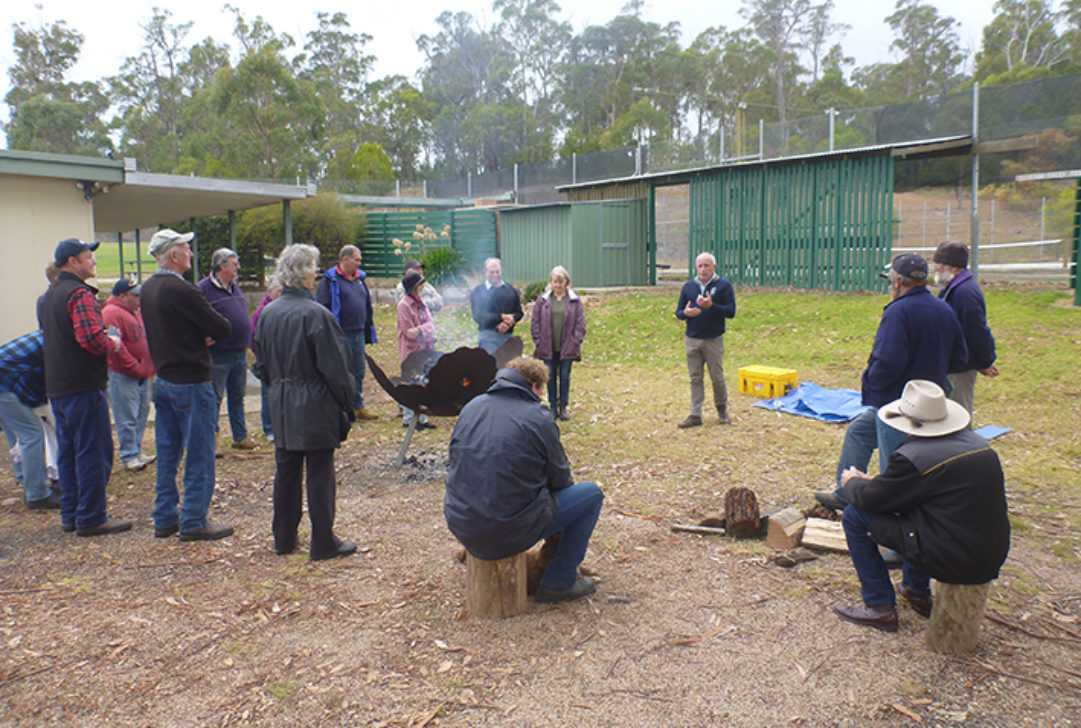 “Get off your backsides” may have sounded brutal advice to producers enduring wild dog attacks but according to the Centre for Invasive Species Solutions National Wild Dog Co-ordinator,  Greg Mifsud, that is exactly what Victorian landholders have done.

“We still have some wild dog hot spots, particularly East Gippsland, but area-specific factors will always make that area more difficult for small livestock,” he said.

From 2014 to 2016, wild dog impacts in Victoria reduced by almost 100 a year and, since aerial baiting was introduced in 2013, anecdotal evidence from both producers and wild dog controllers is that dog activity has significantly reduced.

Greg said this achievement elevated Victoria to the nation’s “pin-up” state for pest control, bridged a communication chasm, and created a new culture of co-operation and understanding.

“Ten years ago, the situation was very different, ,” he said.

“Wild dog attacks on stock were increasing, the community was estranged from wild dog control policy and control programs ; people were angry.

“The attitude was  these dogs are coming out of government land so the government has to do something.”

“Public meetings were heated and ruthless and didn’t achieve much other than giving people an opportunity to vent their frustration.”

Greg identified a way to overcome this by encouraging stakeholders to adopt a community-based approach to wild dog control which consulted, supported and informed people and encouraged adoption of best practice control tools.

The Victorian Government, recognising the need for change, worked closely with Greg and the affected communities to implement a more collaborative approach to the problem.

“It has taken years of knocking on doors, sitting on verandas and leaning on gate posts talking to farmers for this message to gain the momentum it has now,” he said.

“Farmers had to realise they needed to take ownership of the problem, work collectively with neighbours, be proactive and adopt best practice.

“You don’t need a lot of dog control to be effective but it has to be the right method in the right place.”

“It’s rewarding to see how far we’ve come, particularly when I reflect on the number of road and air miles racked up helping to achieve a collaborative system for wild dog control,” Greg said.

“Still, there’s no room for complacency – everybody involved in wild dog control must keep communicating with each other and improve the uptake of best practice.”

No joy in destruction

Few sheep farmers would admit to feeling sorry for killing a wild dog but for Russell Foster the battle between livelihood and pest is truly a double-edged sword.

The Omeo producer knows only too well the sense of madness that descends when everything you, your father and your grandfather have worked for is being torn to shreds – sheep-by-sheep.

But despite the blackest moments of anger, despair and helplessness, he still retains empathy for the very dogs that cause it.

“It’s not their fault, everything’s got to live and when I kill a bitch with pups, I feel terrible.  I walk away worrying how the pups will get on,” he said.

“Some people probably think it’s stupid but if you farm you usually love animals and, in this case, it hurts either way.”

“I lost 350 sheep in 12 months. I’ve no idea how many lambs because they were gone before you even knew they were there,” he said.

One bitch killed 92 sheep and it took nine months to catch her. In the same year Russell shot another 22 dogs.

Russell believes the cause of the onslaught was a combination of circumstances beginning with the reduction of government-supported baiting programs in 2003.

“It was a nightmare: just relentless,” Russell said.

“I didn’t want to give up but I seriously thought of selling out.  I’d spend all day chasing dogs, there was no time for anything else.”

Far from being a whinger, Russell did everything to help himself.

It wasn’t until proactive baiting became the primary tool for controlling wild dogs on public land in 2010, and aerial baiting was introduced in 2013 in six hard-to-reach areas of the State, that Russell began to see the light.

“It was an absolute Godsend, and not just for us – for the wildlife too,” he said.

“There’s always lyrebirds on Mt Livingstone but when dogs are around they disappear,” he said.

“Really, the bush is pretty empty now compared to what it was.

The evolution of the Victorian Wild Dog Management Program which includes integrated management and coordinated community control efforts has helped Russell get his life back – but not without compromises.

His sheep flock remains two-thirds of its former size, he has abandoned using some paddocks for sheep and the huge amount of time it takes to maintain an effective suite of control measures means the compromises aren’t all Russell’s.

His family, wife Colleen, and  twin boys Jayden and Rhys, know too well the time sacrifices involved. If they are missing Dad, they know it’s pack a picnic for the paddock and tag along too.

It is not often community groups are credited with being industry-wide agents of change, however, former State Wild Dog Program Manager Andrew Crocos says Australian Wool Innovation’s wild dog control groups have delivered exactly that. “I think they provided the impetus, the light-bulb moment, that brought a group of sometimes adversarial people together to work in a collaborative manner for a common goal,” he said.

“The reason why these groups were so successful was that they didn’t actually operate like the usual onerous, formal, rural groups; there were no regular meetings, no minutes and no office bearers,” he said.

“They were formed on a district or valley basis and kept local.

“They had professional facilitators supporting them and the groups met for practical purposes such as training to become accredited to use 1080, for the regular collection of 1080 baits and to learn how to set traps.”

Despite the emphasis on developing practical skills, Andrew said farmers would also use these sessions to share experiences and knowledge as well as to give and receive emotional support.

“One of the most insidious and devastating aspects of wild dog attacks for farmers is an encroaching sense of powerlessness that often develops into a feeling of being helpless,” he said.

“Being part of a group helped impacted farmers understand they were not alone, that the dog problem was best approached at a landscape scale and, by being part of a community-wide effort, they could achieve better results than they would have by acting individually.”

Victoria now has more than 25 community wild dog management groups involving about 150 farmers from across East Gippsland and the North East.

Growing with the job

Swifts Creek Wild Dog Controller Anthony Websdale has spent almost 20 years in vertebrate pest control and has witnessed a transformation in both people’s attitudes and their approach to reducing stock losses from wild dog predation.

Q: Do you think farmers’ attitudes have changed?

A: Most farmers I work with have taken more ownership of the wild dog issue, are more proactive and happy to work together with me, reactively when there is a problem. There’s also strong awareness that communities need to work together to maximise their effectiveness in wild dog control.

Q: In the past decade, have the methods you use or recommend to reduce wild dog impacts on stock changed?

A: These days private land managers are using electric fencing and baiting more regularly and they are also open to using new control technologies such as canid pest ejectors than they would have been in the past. There is more strategic planning by all land managers in implementing these control methods.

Q: What has been the biggest change to your job?

A: Farmers and stakeholders are keen to learn about a whole range of control methods. I spend more time engaging with them demonstrating how to be more successful in different control methods such as baiting techniques, trapping and electric fencing.

There is also a lot of new technology being used in the form of motion cameras and iPads. In the past trappers were very protective of their knowledge and kept it close to their chest but recently trappers have been sharing that knowledge amongst themselves and with farmers.

Farming is time demanding and the professional wild dog controller will always be needed. There is an enormous amount to learn in wild dog control methods and techniques and it can’t be learnt overnight.