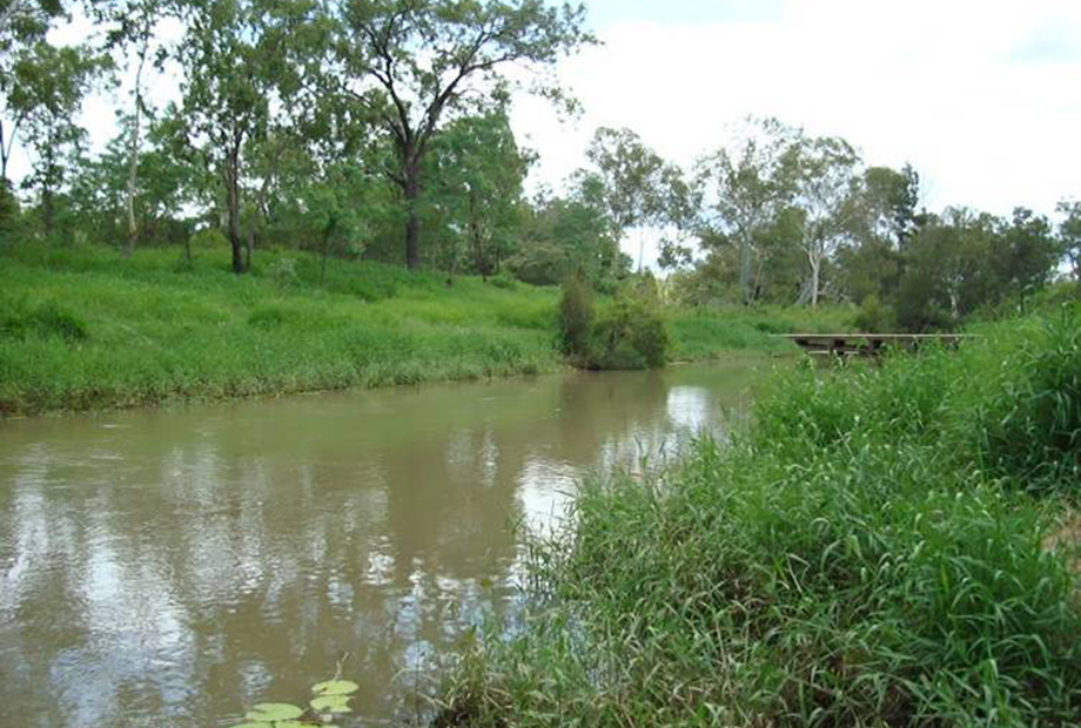 Two species of tilapia, Mozambique tilapia (Oreochromis mossambicus) and the black mangrove cichlid or ‘spotted tilapia’ (Tilapia mariae), have invaded waterways in tropical and sub-tropical Australia. Following their introduction in the 1970s and 1980s, both species have increased in number and have spread rapidly by natural dispersal and human intervention. Black mangrove cichlids are now present in many rivers and creeks in the Wet Tropics region of north Queensland while Mozambique tilapia occupy a large number of catchments in both north-east and south-east Queensland as well as in Western Australia.

In 2008, during a routine pest fish surveillance program, a population of black mangrove cichlids was discovered at Eureka Creek, a tributary of the western flowing Mitchell River in north Queensland1,2.This was a significant discovery as it represented the only confirmed occurrence of a species of tilapia in a western flowing drainage in Queensland. It is possible that this population became established from individuals escaping though the MareebaDimbulah Water Supply Scheme (MDWSS)3. Although fine mesh screens had been installed on the western flowing channels of the MDWSS, it is possible that tilapia circumvented these screens and made it into the Mitchell River Catchment. The other possible method of introduction was by people releasing fish either directly into the waterway or into nearby waterbodies such as farm dams.

Follow-up surveillance after the initial discovery in Eureka Creek found black mangrove cichlids to be in relatively low numbers and limited to an isolated section of stream. This suggested that the species was only recently introduced and that the population had not had a chance to spread. This, coupled with the proximity of the infestation to a main road and a nearby township, implied it was highly likely that the infestation stemmed from the illegal, local release(s) of fish by members of the general public into the waterway4.

To stop the spread of tilapia into the previously unaffected Gulf of Carpentaria drainage by eradicating the Eureka Creek population using the fish poison (or ‘piscicide’) rotenone.

This eradication effort was managed by Fisheries Queensland (part of the Department of Agriculture, Fisheries and Forestry (DAFF)) in co-operation with other agencies and organisations including water provider SunWater, the Environmental Protection Agency, the former Department of Environment and Resource Management, the Wet Tropics Management Authority, the Tablelands Regional Council, the North Queensland Pest Fish Committee, the Mitchell River Catchment Group, traditional owners of country the BarBarrum, Djungan, Chillagoe, Mitchell River and Kowanyama peoples, and affected landholders.

Before the start of the eradication exercise, extensive consultation was carried out with stakeholders. This included relevant federal, state and local government departments, regional natural resource management groups, farmers, indigenous representatives and the general community. The management options considered were:

Features of the program

Pre-eradication surveillance found that the population of black mangrove cichlids was confined to a 3 km section of Eureka Creek1. In October 2008 that section of creek, plus a 1 km buffer both upstream and downstream of the known incursion area, were targeted for poisoning. Water flow in Eureka Creek during this time of year is regulated by the MDWSS. The water supply to the creek was subsequently ‘switched off’ prior to the application of rotenone. Sand dams were constructed to block upstream and downstream movements of fish and possible rainfall inflows. Attempts were also made during this time to reduce the impact on native fish by capturing individuals via electrofishing and moving them to pools outside of the treatment area.

Powdered rotenone mixed with a wetting agent was sprayed onto the water surface, producing a lethal concentration of 0.25 mg/L. This slurry was applied from the creek banks using backpacks and petrolpowered spraying apparatus mounted on all terrain vehicles and four wheel drive trucks. A small boat was used in the largest of the pools to help distribute the piscicide. During poisoning, officers attempted to relocate distressed native fish and turtles that had been partially affected by rotenone into untreated parts of the creek.

The whole operation, including preparation and cleanup, took up to 20 people a week to complete. The actual creek poisoning was carried out over 1.5 days. Water and soil samples were taken and analysed 2 days after the poisoning, to ensure safe levels of rotenone before water flow in the creek system was allowed to resume.

The poisoning program removed 34 black mangrove cichlids and unexpectedly a single Mozambique tilapia. The four largest pools in the treatment area were resurveyed via electrofishing two days after the treatment was completed. No fish of any species (including natives) were found alive in the pools. Post-treatment recovery of native fish populations in Eureka Creek was relatively swift, with many species recolonising the affected area within a month of the treatment5. Up until mid 2011, post-treatment surveys had not found any tilapia in Eureka Creek or in other areas of the Mitchell River catchment5.

What didn’t work and why

Efforts to relocate distressed native fish from the poisoned section of creek to untreated areas were not effective. A number of individuals were moved upstream to clean areas but died soon after. These included species such as sooty grunter (Hephaestus fuliginosus) and rainbow fish (Melanotaenia spp). Attempts to rescue native fish living in areas to be treated with a piscicide should be done over several days before poisoning operations begin. A relatively mild method such as electrofishing should be used to capture fish for relocation.

This is the only known example where a piscicide has been successfully used in a flowing creek system to eradicated tilapia in Australia. Effective coordination of a multidisciplinary team of up to 20 people and early engagement with local stakeholders contributed to the success of this operation.

Invasive Animals Ltd has taken care to validate the accuracy of the information at the date of publication [August 2013]. This information has been prepared with care but it is provided “as is”, without warranty of any kind, to the extent permitted by law.