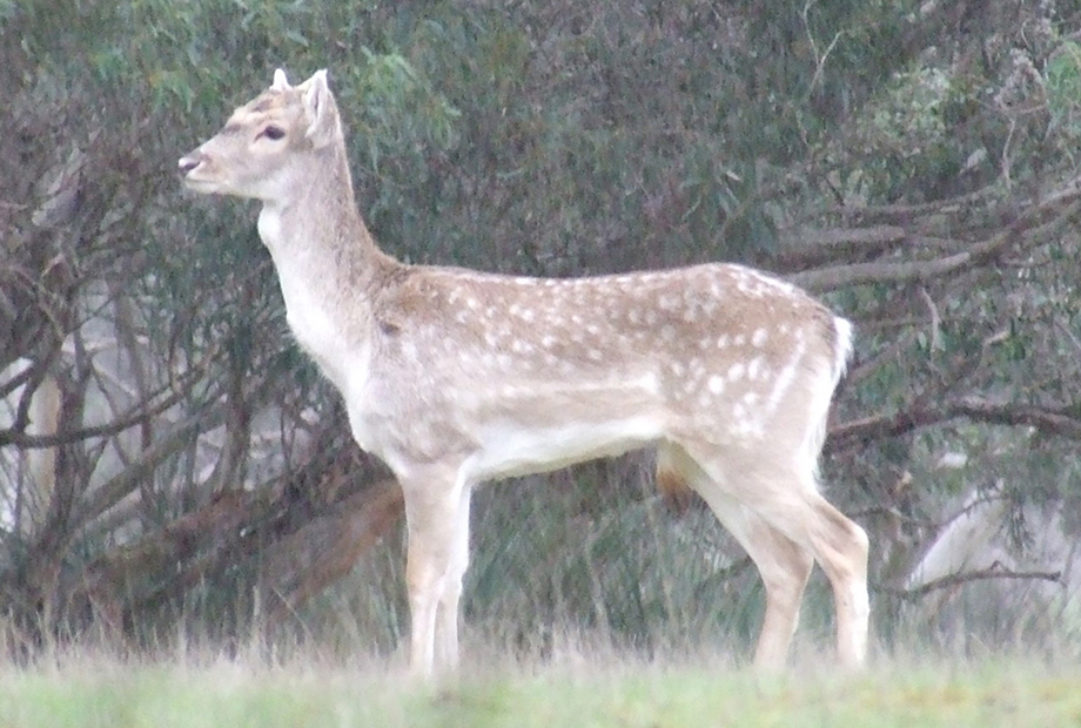 Kangaroo Island (4350 km2 ) lies 15 km off the South Australian coastline and is Australia’s third-largest offshore island after Tasmania and Melville Island. With nearly half of its native vegetation still remaining, Kangaroo Island is nationally important for biodiversity conservation, primary production and tourism. The Island is free of foxes and rabbits but has other pests including pigs, cats and goats.

The Island’s most recent pest is fallow deer (Dama dama) which became feral in 1999 when up to 300 animals (mainly females) escaped from a deer farm adjoining Western River Conservation Park. The cattle stud industry on the island was concerned about the potential for deer to carry strains of Johne’s Disease, which causes death to livestock by blocking the normal absorption of food. They were therefore keen to remove the deer before they caused an economic loss to the industry.

Additional impacts of deer have remained small due to the recent establishment and low numbers, but the potential impacts if numbers increase are substantial. Damage to native and commercial vegetation including crops, pastures and vineyards could be considerable. Deer also cause hazards on roads, and destruction of domestic and public gardens when numbers build up.

In 2006, the eradication of feral deer from Kangaroo Island began as part of a broader project —‘Repel the Invaders’— which aimed to effectively manage key feral animals on the Island. The eradication program was implemented by the Kangaroo Island Natural Resources Management Board (KINRMB) with strong support from the community.

Following the identification of strong community support for deer eradication and subsequent planning, the KINRMB encouraged the reporting of deer sightings through the ‘Dob in a Deer’ program advertised through local newspapers and letters. Fridge magnets with KINRMB contact details were also distributed to all Island residents. This was an important way for control officers to get quick, up-todate information so they could maximise their chances of controlling the deer.

Deer control was predominantly by ground shooting conducted by KINRMB staff with help from some local hunters. Deer were targeted during all seasons but with a more intensive focus during autumn when the bucks tend to roam widely and leave ‘evidence’ of their presence by rubbing their velvets against trees in an attempt to establish and defend small territories. This makes it easier for hunters to detect and shoot deer, particularly the males. Juveniles which have just left their mothers are also easier to target at this time.

Monitoring of deer population trends was important to determine the success of control activities. This involved the use of four different methods:

In 2011 the Natural Resources Management Act 2004 was amended requiring all domestic deer owners on Kangaroo Island to have a permit from the KINRMB. Permit applications may or may not be approved, depending on the risk of deer escape. This system requires deer owners to meet high husbandry standards before a permit will be approved. The right to own deer ceases with a change in property ownership.

Features of the study

Deer are an elusive species and difficult to eradicate. This challenge was met by the employment of control officers on a full time basis. Many sightings were reported by the community. Without such local assistance, it would have been difficult to find and shoot deer already in low numbers. It was also important to have a designated monitoring program in place to gauge the success of control over time. Multiple indicators allowed for greater confidence in results.

Since 2006, 225 deer have been shot on Kangaroo Island, mostly by KINRMB staff. The detection and destruction of deer has remained within 15 km of the release site. The sex ratio of shot deer was biased towards females (1:0.7). Fawns (<12 months) accounted for a high proportion (35%) of all individuals. Monitoring at dams indicates the population has been declining at an average rate of about 40% per year. Remote camera monitoring indicates that there are around ten individuals left.

Time taken to destroy a deer has increased markedly from 40 hours/deer in 2007 to 160 hours per deer in 2013, despite the control officers improving their knowledge and skills and changing their hunting strategies.

The deer eradication program is close to complete with less than ten individuals known to be alive, however, as numbers decline, the effort to control the remaining individuals is increasing. If the high effort can be maintained, complete eradication is feasible within the next few years.