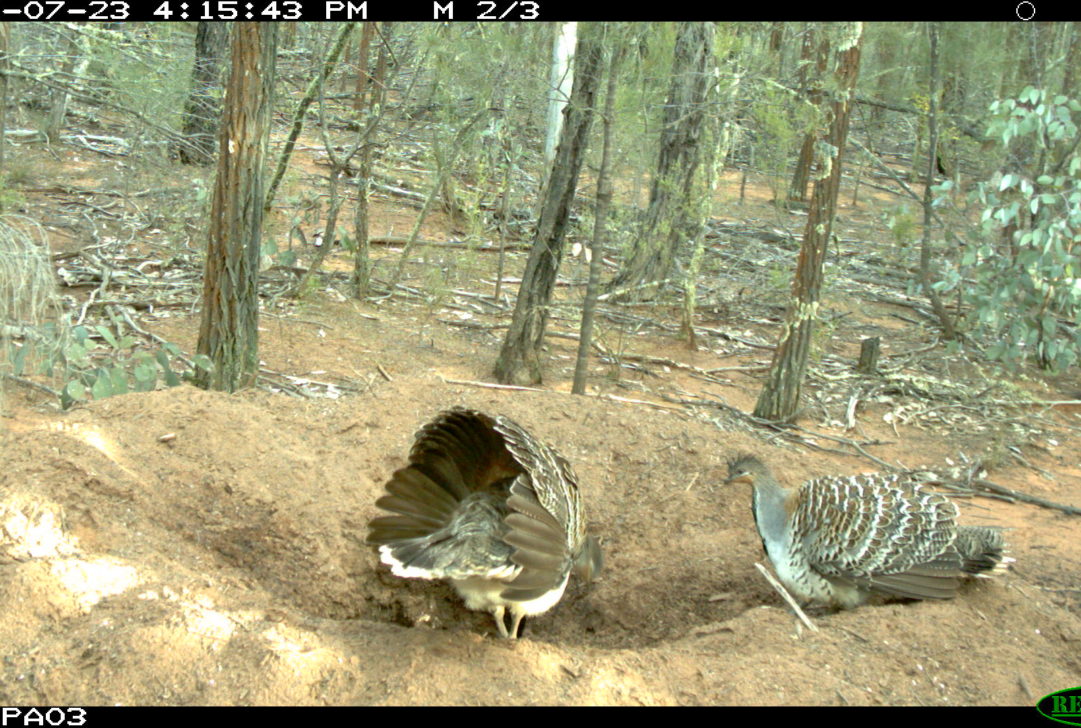 Case study on the effectiveness of a group fox baiting program on land surrounding the Goonoo State Conservation Area of New South Wales.

Goonoo SCA has been set aside to protect the endangered malleefowl (Leipoa ocellata) and other threatened species such as the glossy black cockatoo (Calyptorhynchus lathami) and the koala (Phascolarctos cinereus).

Surveys by Forests NSW have found foxes to be widespread in the area and fox predation has been identified as having a major impact on the malleefowl population. Other locally abundant pest species such as rabbits, feral pigs and goats, as well as land clearing, have played an important role in the decline of the malleefowl. Goonoo SCA is a priority site for action under the NSW Fox Threat Abatement Plan. This area is contained in the Macquarie Catchment Management Blueprint plan as well as the NSW National Parks and Wildlife Service (NPWS) Central West Pest Animal Management Strategy.

In the late 1980s, concerned local residents noticed a decline in local populations of malleefowl and began a fox baiting program to protect these birds. The program was run in conjunction with NSW State Forests (now Forests NSW), NSW Agriculture (now NSW Department of Primary Industries, DPI) and Dubbo Rural Lands Protection Board (now Central West Livestock Health and Pest Authority – CW LHPA) in the adjoining Coolbaggie Nature Reserve. In 2002, efforts were made to broaden the program and 11 fox baiting groups were established, all centred around Goonoo and neighbouring state forests and based on existing Bushfire Brigade Groups.

To reduce the fox population, to minimise predation on malleefowl (L. ocellata) and lambs in agricultural areas adjoining the Goonoo SCA.

This program has involved a variety of stakeholders with a common goal, but with differing motivations (conservation and agriculture). Stakeholders include Forests NSW, NSW NPWS (NSW Office of Environment and Heritage), Central West LHPA and local landholders. More recently, the Central West Catchment Management Authority (CWCMA) has become involved.

The Goonoo Fox Baiting Program Coordination Committee, with representatives from all key stakeholders, meets twice a year to oversee the program’s activities and management actions. The everyday running of the program is coordinated by rangers at the Central West LHPA: they organise regular meetings for the coordinators of each of the smaller management groups, the baiting programs, the various monitoring and evaluation programs, and the production of a biannual newsletter and regular local media releases. Each of the smaller management groups contact members of their own group before each fox baiting program, promote baiting in their area and provide feedback and suggestions to the LHPA rangers. Fox control activities on non-agricultural land are conducted by Forests NSW, NSW NPWS and the LHPA.

Funding is drawn from the many agencies involved in the project. The LHPA provides in-kind contributions for coordination, wages and other costs associated with the project (vehicle costs, insurance etc). Landholders provide in-kind hours for work on baiting programs. Forests NSW and NSW NPWS fund their own baiting activities, and NSW NPWS oversees the malleefowl monitoring program. The Department of Lands provides funds for fox control activities on crown land. Recent funding — used mainly for baits, landholder chemical training and research costs such as cameras and wages — has been supplied by the CW CMA.

This management plan was developed using the ‘Pestplan’ approach1. Ground baiting using 1080 toxin was the only method considered appropriate to cover such a large area in the required period of time. The original program was based on collaborative 1080 baiting twice a year (autumn and winter), with a third baiting during spring in many of the state forests and nature reserves. The program has changed slightly over time, with Goonoo SCA now baited monthly. The surrounding areas are still continuing to bait twice a year.

Baiting activities are coordinated overall by the coordination committee. LHPA rangers contact group coordinators, then hand out baits on a designated day/time to each group and collect data.

A variety of methods has been used for monitoring and evaluation over the lifetime of the project. Initially, fox populations were monitored using spotlight counts. However in recent years, remote cameras have been used to monitor fox activity and occupancy. Malleefowl have been monitored by volunteers, Forest NSW, NSW NPWS and Sydney University, while lamb production has been monitored by DPI and the LHPA. Other information collected includes bait uptake, participation rates, complaints received and the assessment of participant and community attitudes.

This program features excellent inter-agency cooperation, supported by an enthusiastic group of coordinators. The fox control program is integrated with other pest animal control programs across the region.

When the program first began, a total of 180,000 ha was baited (80,000 ha state forest and nature reserves plus 100,000 ha land owned by 120 private landholders). The area being baited and the number of landholders have fluctuated over time, peaking in 2009 when 142 landholders participated and 267,500 ha of area was baited. Since 1998, two 1080 baiting programs have been run per year: one in early autumn and the second in late winter.

Results from the initial spotlight counts indicated a downward trend in the fox population between the Goonoo fox baiting site and the control site (where no coordinated baiting was done). More recent results from camera trapping have shown a decline in ‘trap rates’ and fox activity following the baiting programs, although these reductions are not statistically significant2.

Lamb production monitoring has shown that lamb survival has increased on the properties involved in group baiting programs3. However, no significant response of prey species to fox control has been detected at a landscape level2. In 2009, a remote camera survey of 15 recently used malleefowl mounds found that three were active, although breeding success and chick survival remains unknown. Continued monitoring will help determine whether the program has been a success in terms of threatened species recovery.

Due to the small population sizes of threatened species in the area, monitoring results so far have not provided any conclusive evidence of their recovery. However, there is evidence of increased lamb survival rates in the surrounding agricultural areas. Continued monitoring will be needed to demonstrate any benefits to the endangered native species.

This program demonstrates that long-term inter-agency cooperation and community participation in group fox management programs is possible with good communication and perseverance. With the people structure that is now in place,this program has the opportunity to build on its strategies and greatly improve on its outcomes, provided it receives enough funding.

Invasive Animals Ltd has taken care to validate the accuracy of the information at the date of publication [August 2012]. This information has been prepared with care but it is provided “as is”, without warranty of any kind, to the extent permitted by law.