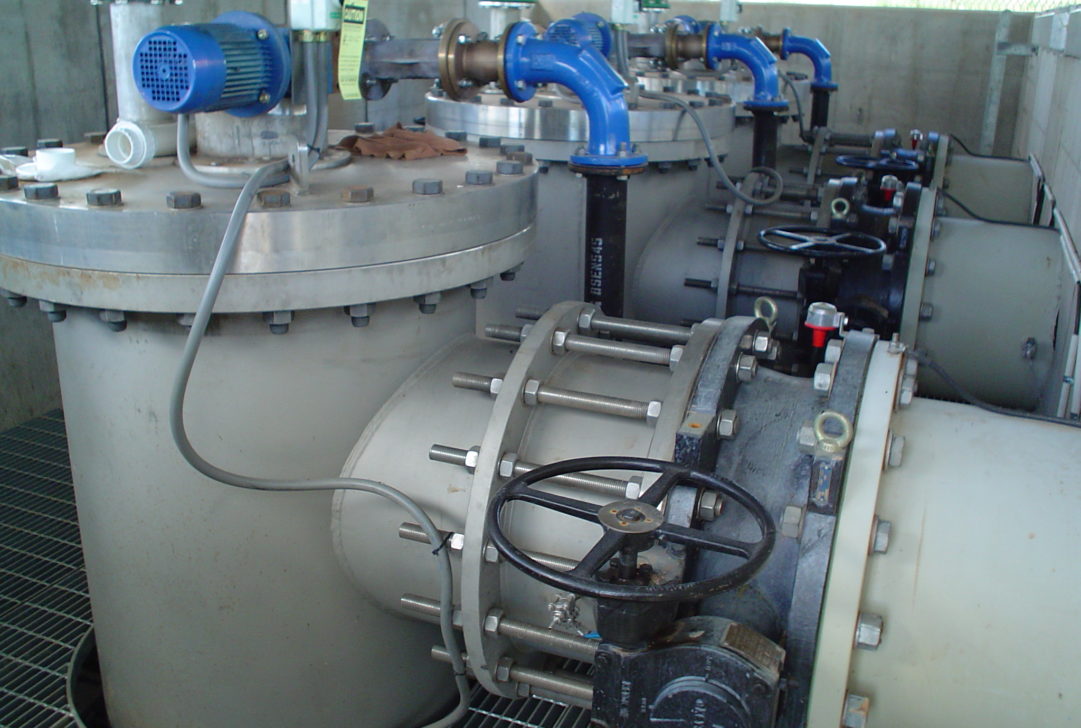 A case study on the effectiveness of using rotating drum screens to prevent the movement of pest fish species through water.

The Boondooma–Tarong pipeline, northwest of Brisbane in Queensland, was constructed during the early 1980s as part of the Boyne River and Tarong Water Supply Scheme. The pipeline was built to transport water from Boondooma Dam at Proston (about 300 km from Brisbane in the Burnett catchment), upstream to the proposed Tarong Power Station at Tarong (about 200 km from Brisbane), and to supply irrigation water along the lower Boyne and Stuart rivers. Along with the pipeline, the scheme consists of three pump stations and three balancing storages. Water is also piped to the Tarong Power Station via the Wivenhoe–Tarong pipeline which carries water from Wivenhoe Dam in the Brisbane River catchment. Excess water from the power station is discharged under licence into another sub-catchment that incorporates the Bjelke-Petersen Dam.

In May 2000, a routine post-stocking survey of Boondooma Dam by the former Queensland Fisheries Service caught two specimens of Mozambique tilapia (Oreochromis mossambicus). This was the first recorded occurrence of this invasive fish species in Boondooma Dam and the Burnett catchment. To gauge the extent of the infestation, Queensland Fisheries staff surveyed downstream from the dam and in other parts of the catchment. These surveys found that Mozambique tilapia were contained to Boondooma Dam and had not spread to other areas of the Burnett catchment.

A stakeholder consultative committee was formed, with representatives from relevant state and local government departments, community and industry groups, SunWater and Tarong Energy. The committee determined that the risk of Mozambique tilapia spreading to the Burnett catchment was very high and recommended that action be taken to prevent their movement through the Boondooma–Tarong pipeline.

Before the discovery of Mozambique tilapia in Boondooma Dam, the Wivenhoe–Tarong pipeline had been fitted with a 0.5 mm rotating drum screen to block the spread of tilapia and carp species through water infrastructure from Wivenhoe Dam into the Burnett catchment. A 0.2 mm screen was later fitted to prevent the inter-catchment transfer of unwanted native fish. This approach appeared to have been a success. It was therefore decided by the consultative committee that a similar approach would be used to prevent the spread of Mozambique tilapia through the Boondooma–Tarong pipeline.

In November 2002, a 0.5 mm Johnson self-cleaning, rotating drum screen was installed on the Boondooma–Tarong pipeline. In a drum screen, water is forced through a cylindrical, stainless steel mesh (see diagram). Material that is larger than the mesh size is trapped on the outside of the screen. When the screen becomes clogged, a pressure switch is triggered. A motor then rotates the screen past a set of backwash tubes that remove debris from the screen and deposit it into a collection sump at the bottom of the filter. Following installation, a number of fish surveys were done in adjacent waterways to determine if Mozambique tilapia had spread, or were spreading, despite the screens.

Fish surveys completed since the screen was installed have found no evidence that Mozambique tilapia have spread past the screen. This control measure has so far been 100% effective in preventing the spread of this pest fish through the Boondooma–Tarong pipeline to the upper Burnett catchment.

Although an effective means of preventing the unwanted movement of fish and eggs, the mechanical screens installed on the pipeline do not prevent the movement of tilapia from Boondooma Dam via other means. For example through the overtopping of the dam during floods or the movement of fish between waterways by people.

The installation of fish exclusion screens on the Boondooma–Tarong pipeline appears to have been successful in preventing the spread of Mozambique tilapia from Boondooma Dam into the upper Burnett catchment. Commitment from relevant stakeholders in this case was vital to the success of the project; from the planning and development stage right through to final screen installation.

Invasive Animals Ltd has taken care to validate the accuracy of the information at the date of publication [August 2013]. This information has been preparedwith care but it is provided “as is”, without warranty of any kind, to the extent permitted by law.