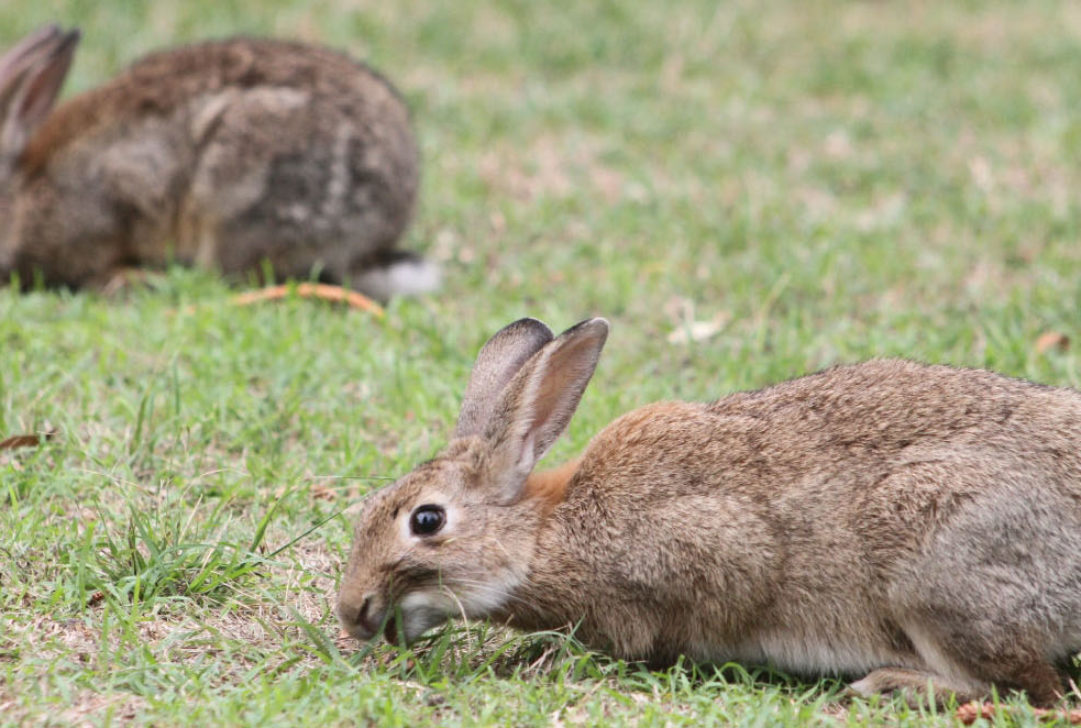 Case study on the success of three rabbit eradication programs on Australian islands.

Rabbits have been introduced to over 800 islands around the world. They are present on 14 of the top 100, high conservation status offshore islands worldwide and have caused signficant damage on islands where they have successfully established wild populations, including Australia1,2,3. Where possible, their eradication is recommended. About 48 rabbit eradication attempts have been carried out globally, with around a 5% failure rate3. In Australia, there have been 22 successful rabbit eradication programs on islands. Three examples presented here are:

To achieve eradication, a combination of techniques is often needed to overcome unique challenges such as rugged and isolated terrain, remoteness, effects on non-target species, and high costs2,3,4. A number of other conditions must be met for an eradication program to be successful, including:

Although challenging, eradication is often feasible on small islands and can be more cost-effective than long term sustained control.

To permanently remove (eradicate) rabbits from islands with high conservation values, and attempt to restore biodiversity and natural processes as much as possible.

Phillip Island (Norfolk Island), South Pacific Rabbits, feral goats and feral pigs were introduced to Phillip Island during the early colonial settlement of nearby Norfolk Island. Introduced herbivores in particular, caused severe degradation of the ecosystem5. Goats
and pigs were shot or died out however rabbits survived. Some areas were fenced to exclude rabbits, and the vegetation within them survived and grew quickly. Wildlife, including Sooty Terns, also increased inside the exclosures.

In 1981, island managers (Parks Australia staff in consultation with Norfolk Island Council) attempted to eradicate rabbits using the highly virulent Lausanne strain of myxoma virus. Trapped rabbits were injected with the virus and released back into the wild. Some areas of the island were only accessible by sea or were not accessible at all, so European rabbit fleas carrying myxoma virus were introduced aerially using a bow and arrows shot from adjacent cliff tops. Fleas in a glass vial were fitted onto the steel arrowhead which broke on impact, releasing the fleas into the environment. Another inaccessible area was accessed by staff who abseiled and climbed onto the upper part of a 250 m cliff. Overall, this approach was very effective at reducing rabbit numbers however when the virus and fleas were no longer available, rabbits increased once again. A new strategy was introduced in 1983 using a best practice approach.
Poisoning with 1080 (sodium monofluoroacetate) oat baits was the main method used, supplemented by more intensive techniques such as trapping, fumigating, shooting and warren destruction.

Because of the rough terrain and inaccessibility of many baiting sites, this was a long and difficult process. Nevertheless, rabbits were successfully eradicated by 1988.

Successful rabbit eradication programs have been carried out by the NSW National Parks and Wildlife Service (part of the Office of Environment and Heritage) – with the help of collaborating agencies – on several islands off the coast of New South Wales, including Cabbage Tree Island (30 ha), Montague Island (82 ha) and Broughton Island (144 ha). These particular islands are small and heavily vegetated, and had been badly damaged by rabbit grazing2. Nesting seabirds such as the endangered Gould’s petrel on Cabbage Tree Island were also at risk because of vegetation loss and environmental changes being caused by rabbits6.

Rabbits were eradicated from Cabbage Tree Island using two biological control agents and poison baiting with brodifacoum. Myxoma virus was already present on the island, so in early 1997, European and Spanish rabbit fleas were introduced to aid its transmission and effectiveness. Although many rabbits died from myxomatosis, some remained unaffected and some infected rabbits recovered. After the natural outbreak of myxomatosis had subsided, rabbit haemorrhagic disease virus (RHDV) was deliberately introduced via injection of seven captured rabbits that were then released in August 1997. Trapping results showed that 55% of the remaining population of susceptible rabbits died from RHD within 3 weeks. In September 1997, 300 kg of poisoned bait (Talon® 20P) was spread by helicopter across the island. All surviving rabbits died from poison baiting4.

Eradication programs on Montague Island and Broughton Island aimed to remove rabbits as well as rodents. RHDV was already present on Montague Island, probably due to natural spread2, but was deliberately introduced via carrot bait to Broughton Island. In both cases, biocontrol was followed by two aerial bait drops using brodifacoum (Pestoff 20R cereal bait) at a rate of 12 kg per hectare. Rabbits were successfully eradicated on both islands2.

On Macquarie Island, 1500 km off Tasmania, rabbits had severely damaged the landscape and impacted on native plants and wildlife7. Parts of the island had been degraded by erosion and soil loss after major plant species were significantly overgrazed by rabbits (Figure 1). In 2006, two landslides partially caused by rabbit grazing and warren building killed penguins and damaged visitor boardwalks on the island7. Grazing impacts also affected many of the island’s seabirds, including burrowing petrels, which rely on tussock vegetation cover for shelter and nesting7. Because the island is listed as a World Heritage site, eradication of rabbits (and rats) was the highest conservation priority for the reserve.

In 2004, Macquarie Island’s managing agency the Tasmanian Government Parks and Wildlife Service (PWS), in collaboration with the Australian Government and the Australian Antarctic Division (AAD), began the largest pest eradication program of its kind in the world to date. Although vertebrate pest management has been carried out on the island since the 1960s, rabbits have persisted and numbers have fluctuated over time7. Their success is thought to be a result of:

A major obstacle in the early stage of the project was a delay in the commitment of funds to carry out the program. Thorough planning was needed to overcome some of the anticipated challenges, such as the island’s remoteness, the long lead time required for training the rabbit detection dogs, and obtaining the various permissions needed to perform the eradication activities. During the implementation phase, other challenges included poor weather conditions and the lack of vessel availability to ship staff to the island. At first, RHDV was ruled out as a possible control method on Macquarie Island due to the cold, wet conditions. However RHDV was reconsidered after the first round of aerial baiting resulted in a number of non-target deaths in 20107. A strategic virus release was carried out in February 2011 in an attempt to reduce rabbit numbers as much as possible before the next aerial baiting phase, and to minimise the risk of secondary poisoning from toxic rabbits by scavenging non-target birds. Virus-laden grated carrot was distributed by hand at selected high rabbit density sites. Some rabbits were also captured and injected with the virus, then released7. RHDV spread rapidly around the island, even though release sites were kilometres apart.

After biocontrol, cereal baits (Pestoff 20R) containing a small dose of brodifacoum (0.002%) were distributed aerially across the whole island, targeting rabbits and rodents. Bait was spread from buckets slung underneath helicopters flying along predetermined routes, with an 80 m-wide swath, which was overlapped by 50% to ensure accurate bait coverage at the prescribed rates8.

Although most poisoned rabbits died in their burrows, some rabbits died above ground. To reduce the risk to scavenging birds as much as possible, a field team searched for and buried any dead rabbits they found, and removed carcasses of birds that had died from primary or secondary poisoning. The field teams also carried out follow-up control using specialized techniques such as shooting, fumigation, baiting, rabbit detection dogs and trapping7.

Rabbits were successfully eradicated from each of the NSW offshore islands and Macquarie Island using biological control followed by baiting2,12. One example of a positive outcome has been regeneration of the rainforest understorey and anincreased density of herbs and grasses on Cabbage Tree Island6 (Figure 2).

The release of RHDV at 15 high rabbit density sites on Macquarie Island was also successful at killing many rabbits, and successfully reduced non-target mortality island-wide7. Two rounds of aerial baiting were completed across the entire island as of June 20117 and no rabbits have been sighted since December 201112.

Figure 3: A skua scavenges a rabbit that has died from RHD on Macquarie Island. RHD is harmless to other wildlife and presents no risk of secondary poisoning to scavengers. Image: Chris Hill

It is evident that if rabbits continued to exist and cause damage on these islands, some seabirds and unique plant species would no longer be able to survive there. Removing rabbits (and other vertebrate pests) is expected to provide significant long-term protection and benefits to island ecosystems.

Suitable technology and methodology is now available for considering rabbit eradications on larger islands, and to help progress conservation goals of restoring biodiversity. On Macquarie Island, the short-term impact of poison baiting on non-target bird species is expected to be significantly outweighed by benefits to native species, especially if rodent eradication is also successful.

Ongoing monitoring of islands from which rabbits have been eradicated will be crucial to determine the long-term effects of rabbit removal on these sensitive environmental systems.

Invasive Animals Ltd has taken care to validate the accuracy of the information at the date of publication [May 2014]. This information has been prepared with care but it is provided “as is”, without warranty of any kind, to the extent permitted by law.