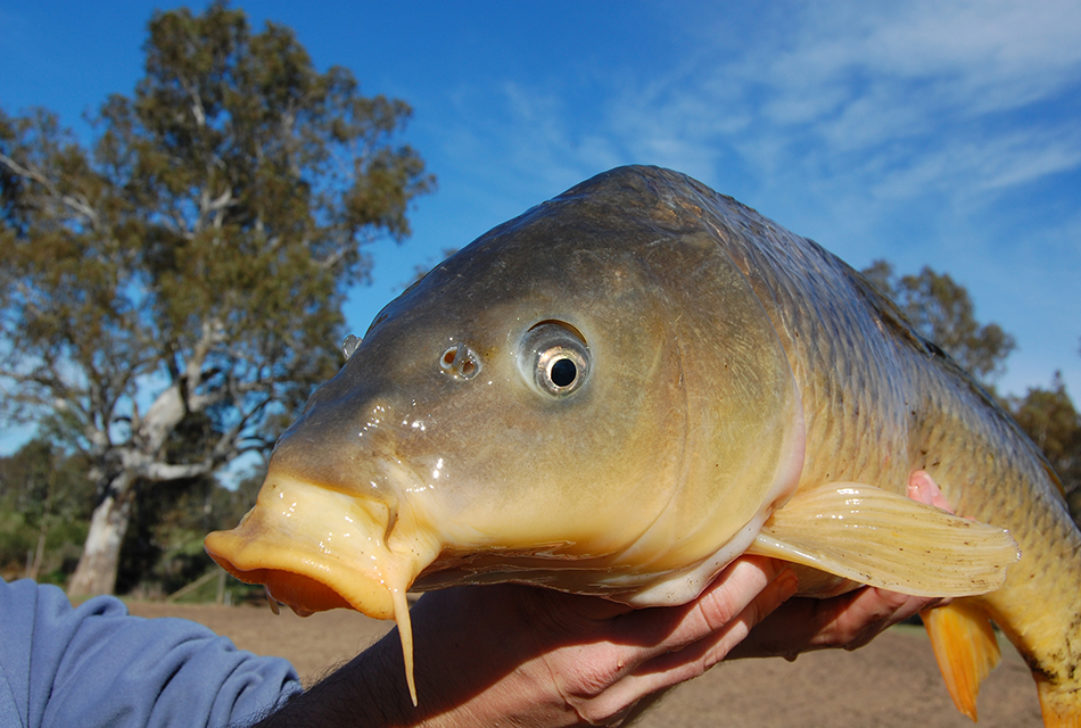 A case study on the effects of using a wetland carp separation cage at Lake Bonney in South Australia.

Lake Bonney is a freshwater lake adjacent to the township of Barmera in South Australia. Fed from the Murray River through the Chambers Creek wetlands, the lake is 7 km long and 3.5 km wide and covers about 1600 ha, with an average depth of 1—2 m.

In 2007, the lake was disconnected from the Murray River as part of water-saving measures during a drought. The following year, water was diverted back into the lake from the river, leading to a large aggregation of carp around the inflow point. Commercial fishers and the general public harvested 35 tonnes of carp at this time1.

A further 52 tonnes of carp were removed by commercial fishers in 2009–2010. Although this fishing reduced the estimated population of carp by a third, it was unlikely to be a sustained reduction, since carp spawned in the spring of 2009 and young fish were captured in December 2009.

The aim of this project was to trial a number of potential methods for controlling carp, including different designs of WCSC and screen units.

During 2009–2010, the lake received water on several occasions for environmental purposes. This provided a unique opportunity to trial a number of potential methods for controlling the estimated 50–100 tonnes of carp still present. These methods included a wetland carp separation cage (WCSC) with a number of screen designs for screening fish at wetland inlets2.

The resident carp and native fish populations in the lake were assessed and it was estimated that 50–100 tonnes of carp were present. Bony herring was the only large-bodied native species found.

The design of the WCSC aimed to be safe, effective, easy to operate and vandal-resistant1. It was an improved version of a previous prototype used at Banrock Station, South Australia, where 8 tonnes of carp were captured in 4 months. Objectives of the new design were to achieve:

Two further refinements were made to maximise the effectiveness of the WCSC. Carp pivot screens, based on the original jail bar design, were built specifically for use at Lake Bonney, where there are high water flows and a high risk of vandalism. In conjunction with these screens, carp deflectors were designed to stop carp from jumping over the pivot screens, while allowing for debris and fauna, such as turtles and bony herring, to be washed over the top.

The carp pivot screen could be adjusted to various angles (0–90°), locked in a vertical position to function as a carp screen, act as the gate for the WCSC, or be removed for maintenance. The carp deflectors were positioned out of the water, 15 cm above the top of the pivot screen. This distance was less than the mean depth (>15 cm) of carp expected to jump vertically over the screens, and greater than the mean body width (9 cm) of large-bodied fauna expected to wash over the screens on their sides.

Design challenges at Lake Bonney included the high velocity of water needed to meet filling timeframes, the by-catch of other aquatic fauna, screens becoming fouled with debris, and carp escaping over the screens before the assessment was started. Unfortunately, after being installed in 2009, the cage was found to have several defects associated with the initial engineered design and another engineering firm was employed to address these issues. Once revised, the system was able to be trialled in the second half of 2010, following a further water allocation for the lake.

Overall, more than 500 carp (about 2.3 tonnes) were captured in the WCSC over 13 harvesting events. Contrary to what occurred during previous water allocations in 2008 and 2009, carp did not form large aggregations following the 2010 filling event. This could be explained by differences in the timing of the water allocations (the 2010 allocation took place 4–5 months earlier in the year than those in 2008 and 2009), the relatively low water temperature (10°C), and the temporal improvement in the lake’s water quality.

Outputs of the project included:

There was a high level of by-catch (356 bony herring, as well as a few golden perch, goldfish and birds) during the trial. This highlights the need to survey the resident native fauna on a site-by-site basis before installing any carp management infrastructure.

Carp appeared less inclined to try to migrate out of the lake over time, suggesting that harvesting should be done in the early stages of a lake being filled.

Many types of screens have been used to restrict the movement of fish either into or out of wetlands, but most do not achieve the best environmental outcome in terms of allowing the free passage of native fish and other fauna, while restricting the movement of carp and other unwanted species. The project at Lake Bonney helped identify optimal screen designs to better achieve this outcome.

Fixed screens, such as the grid mesh and the original jail bar design, are not suitable for wetlands like Lake Bonney that have high flows and easy public access. This is because they:

While commercial fishing can be a valuable tool for controlling carp, it is of limited use as a stand-alone technique. This study has shown that netting a proportion of adult fish does not stop carp from spawning, and replacing the harvested fish.
The WCSC is a safe and adaptable device that makes a useful addition to the arsenal of carp control techniques. Its design can be altered to suit different wetlands and changing management priorities (eg if only carp are present, or if a threatened species is detected). Effective refinements include: