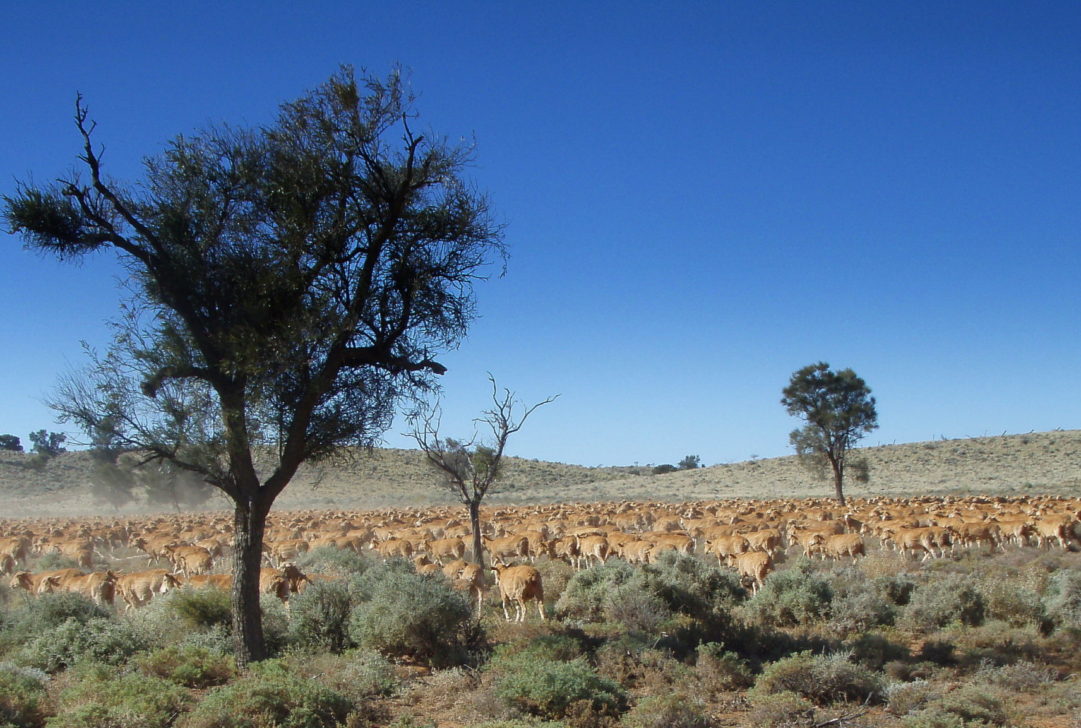 Case study on the effectiveness of warren ripping to control rabbits on a wool-producing property in far-west New South Wales.

Thackaringa Station is a long-established wool-producing property of 66,000 ha near Broken Hill in western NSW, owned by David Lord and his family (Figures 1, 2). Historically, rabbits have persisted here in large numbers, causing vegetation and biodiversity loss, and increased grazing pressure. These impacts are comparable across many parts of arid-zone Australia, which are suffering the same devastation.

In past decades, Thackaringa’s owners took the opportunity to capitalise on the initial impact of biological control on the rabbit population. Following the establishment of myxomatosis in the 1950s, sodium monofluoroacetate (1080) baiting and some warren ripping was used in an attempt to keep rabbit numbers down on the property. As the myxoma virus became less effective, the rabbit population steadily increased (although never to pre-1950 levels) and warren density was 0.47 warrens/ha over the majority of the property. In the late 1980s, a trial warren-ripping program was run in the region, destroying 72,000 warrens over 22 properties, including 6000 on Thackaringa.

Rabbit haemorrhagic disease (RHD) dramatically reduced rabbit numbers on Thackaringa in 1995, with an estimated 750,000 rabbits dead within six weeks. The owners observed an immediate positive response by native plant species and wildlife. However, rabbits survived at low densities (less than 10% of the pre-RHD population) and continued to restrict the regeneration of arid-zone plants.

By 1999, David could see that biological control alone was not enough to significantly reduce the effect of rabbits on plant growth and survival. His trials with rabbit-proof enclosures showed that where there was no rabbit grazing, the rare purple-wood wattle Acacia carneorum (previously A. carnei; listed as a nationally vulnerable plant species) regenerated 16 times more often than in areas that rabbits could access. Before the trials, only mature trees aged between 180-300 years old were present, suggesting that there had been no recruitment of this plant species since rabbits arrived in the area in the early 1880s1,2. It was considered likely that other native plant species would have been similarly affected.

Thackaringa’s owners were able to secure funding from the Commonwealth Endangered Species Program in 2001–2002, a program of the former Natural Heritage Trust (NHT). With this funding, they were able to design and implement a comprehensive warren-ripping program to finish earlier works carried out on the property and to promote best practice rabbit control.

To maximise past investments to control rabbit populations and reduce rabbit impacts on Thackaringa using an intensive warren-ripping program, and enhance the regeneration of A. carneorum and native species diversity within the region.

A key component of this project was the large personal financial and physical contribution made by the Lord family, in addition to the day-to-day running of the station. Initial funding to conduct rabbit control works was sourced through the then Australian Government’s National Soil Conservation Program. The NHT supplied funds, which enabled ripping of the remaining 22,000 warrens.

Before ripping, an observer on a motorbike identified and mapped all warrens on the property using a GPS. When ripping was due to start, the observer used the GPS to relocate the warrens and lead the bulldozer to each warren. While the bulldozer was ripping, the observer searched for any missed warrens nearby.

A local contractor was hired to conduct the ripping works. A large tractor with rubber tracks was initially used, but was found to be unsuitable on stony ground. A larger D8 bulldozer was then used to rip the remaining warrens (Figure 3). Extensions on either side of the ripper bar enabled the bulldozer to pull five tines instead of three, with 600 mm spacing between the tines, which increased ripping productivity. Winged boots (extensions on each of the five tines) eliminated the need to cross rip. Up to 32 large warrens each hour (26 warrens each hour on average) were able to be ripped using the larger bulldozer.

This program featured a large financial contribution from the landholder, and the use of a heavy bulldozer modified with winged boots to effectively rip warrens.

This program featured a large financial contribution from the landholder, and the use of a heavy bulldozer modified with winged boots to effectively rip warrens.

Monitoring after ripping showed no re-opening of warrens. However, 500 missed warrens (ie not ripped) have since been mapped and will be ripped in the near future.

In recent years, there has been sustained growth of seedlings and perennial grasses on the property. Of particular importance is the regeneration of the rare A. carneorum (Figure 4). Plants that were once considered winter/spring flowering on Thackaringa, such as the Sturt’s desert pea (Swainsona formosa), have continued to flower throughout the summer months. More wildlife has been observed on the property since warren ripping, including a large number of little button-quail, echidnas and small native marsupials. The owners have also reported fewer foxes, and feral cat sightings are rare.

After intensive warren ripping, Thackaringa Station has been able to keep rabbit numbers low and maintain its core flock of breeding ewes without resorting to agistment during a 20-year period of drought. The property’s average lambing rate, excluding years when ewes were unable to be joined due to the drought, has been maintained at 75%. Control measures have reduced potential rabbit grazing pressure ten-fold: from the equivalent of 140,000 dry sheep before RHD to 14,000 dry sheep equivalents (DSE) post-RHD.

Following the ripping program, rabbits have had limited impact on Thackaringa’s production and biodiversity but David maintains “it’s important not to become complacent”.

Ripping costs in 2002 were $145 (GST exclusive) for every hour, or about $5.58 per warren. There were also costs associated with mapping the warrens and having an observer escort the bulldozer during ripping. On a good 12-hour working day, the observer could map up to 200 warrens at a cost of the wage and motorbike plus incidentals (eg a few dollars for batteries for the GPS).

Step 1: Map all warrens using a GPS
Step 2: Use a heavy bulldozer with five tines and winged boots – and a proficient operator
Step 3: Rip during hot, dry conditions and ensure all warrens in the area are destroyed

Integrated rabbit control using heavy machinery to destroy warrens can maximise the effect of RHD and reduce rabbit populations to very low densities. In this case study, reducing rabbit numbers helped to minimise the effects of drought on pastures and livestock, and provided benefits to both agricultural production and the natural environment. By investing in rabbit control and using a best practice approach, Thackaringa’s owners have been able to increase biodiversity without varying livestock carrying capacity.

Special thanks to David Lord for assisting with the preparation of this case study.

Invasive Animals Ltd has taken care to validate the accuracy of the information at the date of publication [November 2011]. This information has been prepared with care but it is provided “as is”, without warranty of any kind, to the extent permitted by law.