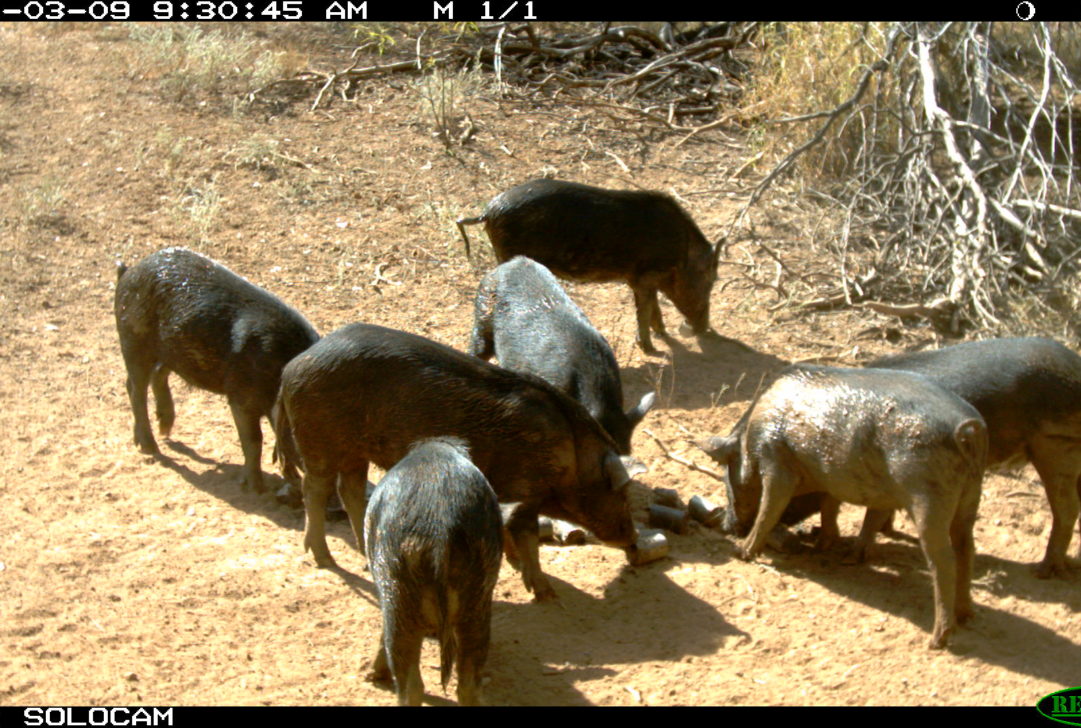 Since 2005, the Invasive Animals Cooperative Research Centre (IA CRC) and primary partners Meat and Livestock Australia (MLA) and Animal Control Technologies Australia (ACTA) have been developing a new humane feral pig bait, HOGGONE®. The baits contain sodium nitrite — a common preservative for human food — which in pigs causes methaemoglobin formation and rapid depletion of oxygen to the brain and other vital organs. A relatively humane and rapid death results in 1—2 hours, depending on the dose consumed1.

During the development of HOGGONE®, field trials were conducted in various Australian states and territories (Qld, NSW, ACT, SA and WA) to test the bait’s effectiveness in a range of feral pig-affected habitats. One of these trials took place near Goondiwindi, a cropping and beef production region of southwest Queensland. Study sites were located on private stations about 50km west of Goondiwindi, which according to historical records are home to the greatest feral pig densities in the area.

In Queensland, feral pigs are one of the most widespread and damaging invasive animal species2. Feral pigs are a Class 2 Declared pest animal in this state and landowners must take reasonable steps to keep their properties free of feral pigs, according to Queensland’s Land Protection (Pest and Stock Route Management) Act 20023.

This is a major challenge in remote and inaccessible areas of the state, and might only be possible through the use of economically viable and species-targeted tools such as HOGGONE®.

The aim of the trial was to reduce the feral pig population by at least 70% at the trial sites, without affecting non-target species. This knockdown rate is the minimum target needed for registration of HOGGONE® as a vertebrate pest population control product, and is also needed to achieve a substantial and lasting decline of a feral pig population4.

The project was jointly sponsored by MLA, the former Bureau of Rural Sciences and the Commonwealth Department of Sustainability, Environment, Water, Population and Communities. Queensland Murray–Darling Committee (QMDC) regional coordinator for pest management, Darren Marshall, and the managers at the two stations were key participants in the trial. The Goondiwindi region was approved as a site for HOGGONE® registration trials by the Australian Pesticides and Veterinary Medicines Authority5 (APVMA; Category 23 PER9968). The use of animals in this trial was approved by the Queensland Department of Primary Industries and Fisheries Animal Ethics Committee. All baits were manufactured by ACTA (Somerton, Victoria).

Map of the station locations where the trials took place. Inset shows the general location of the Goondiwindi area as a red box.

The field performance of HOGGONE® was determined by measuring the difference in pre- and post-toxic baiting feral pig activity, mob size and bait uptake. The trial was conducted in march 2011 following flooding summer rains. The size of the trial was based on the experimental design guidelines of the APVMA, which determined that a minimum of 50 animals are needed for treatment and for non-treatment sites not exceeding 100km2.

Feral pig hotspots within the treatment and non-treatment areas were identified and free-feed fermented grain placed at these locations. Researchers then introduced non– toxic HOGGONE® baits, installed motion-sensing cameras and noted the feral pig hotspots as GPS waypoints. Treatment and non-treatment areas each had a total of 10–15 bait stations. A similar number of independent monitoring stations were set up around water points within each of the areas to record species visits. Once non-toxic bait feeding and the number of attending animals had plateaued, toxic HOGGONE® baiting was started and continued until the bait was no longer being taken by feral pigs. Bait uptake usually ceased by about the third day of toxic baiting. All remaining toxic baits were then removed from the site and destroyed.

The following techniques were used to indirectly measure reduction in the feral pig population:

…on night 3 we had 80 pigs free feeding, on night 10 we had 180 pigs – it highlights that the longer you can free feed, the more you actually impact on the whole population

Feral pig populations were harder than usual to target because unusually high rainfall meant they were not concentrated around permanent water. Additional pre-feeding was needed to concentrate feral pigs at the bait stations.

These field trials in southwest Queensland showed HOGGONE® baiting can effectively achieve a significant and rapid knockdown of a feral pig population. Even without deployment via a HogHopper™, HOGGONE® baits posed little risk to non target animals in these trials.

In this study, results exceeded the minimum knockdown required for registration of HOGGONE® as a vertebrate pest control product. The national product registration process has ensured, through multiple trials, that HOGGONE® baits work well on the ground and across a range of feral pig habitats.

HOGGONE® should provide a humane and broadscale means of controlling feral pigs in Australia. With proven efficacy and target specificity, HOGGONE® and HogHopper™ are already highly anticipated by the landholders who have seen these technologies in action.

Invasive Animals Ltd has taken care to validate the accuracy of the information at the date of publication [February 2013]. This information has been prepared with care but it is provided “as is”, without warranty of any kind, to the extent permitted by law