The population of feral camels (Camelus dromedarius) in Australia is currently estimated to be around one million with numbers increasing at around 8% per year. At high densities camels can have serious impacts on vegetation and have the potential to cause significant production losses through competition with cattle. They can also damage fences and watering points, particularly during times of drought. Control methods include capture (by trapping at watering points or mustering), exclusion fencing, ground shooting and shooting from helicopters.

Feral camels are mustered by helicopter, motorbike (or other vehicle) or on horseback, often with the assistance of coacher camels. Once mustered into yards, the camels are usually sold to abattoirs for slaughter which can offset the costs of capture and handling. Small numbers are also sold for live export. Where there is no market for them or where removal may be too costly or impractical, eg in remote areas without access to transportation, camels are sometimes destroyed by shooting in the yards.

Mustering is target specific and does not usually impact on other species.

The firearm should be aimed at the back of the head at the intersection of the skull and the neck and directed towards the mouth. ie perpendicular to the neck line.

The camel is shot from the side so that the bullet enters the skull midway between the eye and the base of the ear. The bullet should be directed horizontally.

Note that frontal brain shots are not recommended during ground shooting of camels since the shape of the skull can cause bullet deflection.

Diagram 1: Recommended shot placements for camels. Note that frontal brain shots are not recommended during ground shooting of camels since the shape of the skull can cause bullet deflection. 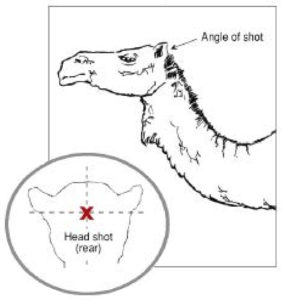 It is important to connect with the relevant government authorities to ensure you have the right permits in place being undertaking feral camel management.