Wild European rabbits typically have grey-brown back fur and a white-grey belly. Colour varies from sandy light brown, to ginger, black, and occasionally, white. Rabbits are characterised by their long ears, long hind legs, short fluffy tail and feet that are well furred beneath, with large straight claws. Males and females are similar in size and appearance; male rabbits may have a slightly broader head. Adults weigh 1–2.25 kg and range in length from 35 to 45 cm1.

In Australia, rabbits are widely distributed and occur in a variety of habitats, including urban and coastal areas. They prefer low vegetation, well-drained, deep sandy soils and refuge such as scrub, blackberries or fallen logs1. Rabbits construct large warrens up to 3 m deep and 45 m long. Warren complexes are generally larger in more open country. Warrens provide cover and protection from predators and extreme temperatures, and allow rabbits to live in open grasslands, grazed pasture and arid land. Where there is abundant surface cover, rabbits may live above the ground.

Rabbits are herbivores that eat a wide variety of plants, including crops, roots, pastures, young trees and vines2. They can graze plants to ground level and may eat up to one third of their own body weight daily, although their average daily intake is 100–150 g2. In arid areas rabbits need access to water, but elsewhere they get enough moisture from their food.

Rabbits prefer to eat soft, short, succulent plants such as grasses and herbs

Females can breed at any time of the year if there is sufficient feed available. The main breeding season is determined by rainfall and the early growth of high-protein plants. During this time, wild rabbits form territorial groups containing 1–3 males and 7–10 females, led by a dominant pair. Wild rabbits can begin breeding at four months old and may produce five or more litters in a year, with up to five young per litter. In less favourable conditions they can still produce one or two litters each year2.

Rabbits have a gestation time of 28–30 days. Young are born blind and hairless and open their eyes after 7–10 days. They emerge from the warren weaned at about 18 days and leave the nest at 23–25 days. Survival of young varies between years and with seasonal conditions, and also depends on the incidence of diseases. Wild rabbits rarely survive past six years of age1.

Rabbits are dependent on warrens or other shelter so destruction of these will greatly reduce the local rabbit population1. Rabbits are also highly susceptible to predators and disease. In Australia, their most significant predators include feral cats, foxes and dingoes. Two of the most deadly diseases to rabbits are myxomatosis and rabbit haemorrhagic disease (RHD, formerly known as calicivirus). However, variable virulence of different virus strains and increased genetic resistance by rabbits to the diseases over time has lessened their effectiveness as biological controls1. 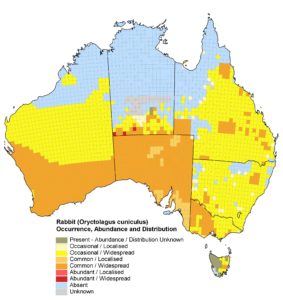 Map: Occurrence, abundance and distribution of rabbits in
Australia

The rate of spread of the rabbit in Australia is believed to be the fastest of any colonising mammal in the world1. Domesticated rabbits were first introduced to Australia in 1788. The first feral populations were observed in Tasmania in 1827. Thomas Austin introduced wild rabbits to his property in Geelong, Victoria, for hunting in 1859. By 1886, rabbits had spread north to New South Wales and Queensland. They were in Western Australia and the Northern Territory by 1900. Their colonisation was aided by existing native animal burrows and habitat modification for farming, and by further deliberate human introductions for meat and hunting. The construction of a 1700 km rabbit-proof fence in Western Australia failed to stop the spread of rabbits and they are now found across the continent, and on several offshore islands1.

Rabbits graze on native and introduced vegetation, crops and pastures. Rabbit grazing can prevent seedlings from regenerating and reduce crop yields, as well as increase competition for feed with livestock. This may affect the carrying capacity of livestock on a property, resulting in lower weight gain, lower wool production, reduced births and higher mortality during drought. Rabbit grazing of emerging crops can also result in high yield losses of up to 100%. Rabbits cost Australian agriculture $206 million in production losses each year3.

Rabbits directly compete with native wildlife for food and shelter. They also impact on native plants by ringbarking, grazing and browsing, and preventing regeneration of seedlings. Their digging and browsing leads to a loss of vegetation cover, which in turn can result in slope instability and soil erosion. There are at least 156 threatened species that may be adversely affected by competition and land degradation by rabbits, which is listed as a key threatening process under Commonwealth legislation4.

Harvesting wild rabbits can benefit regional employment and provides a recreational opportunity for local shooting clubs and hunters5. However, the monetary value of this industry is small1. Rabbits can also damage lawns, gardens, golf courses, sportsgrounds and regional parkland reserves, and may undermine buildings, garages and sheds, causing human-wildlife conflict in urban areas. Indirect costs of rabbits include disease transmission, which can present human and animal health concerns1,5. The social cost of rabbits includes psychological impacts, as landholders