Poison baiting is often a logical first step in an integrated program of rabbit management. However, if used alone, baiting provides only short-term control and is therefore best used as a means of reducing rabbit numbers before carrying out other controls such as warren destruction1. In some situations baiting may be the only immediately feasible solution to a problem, such as rabbits living in dense vegetation on the edge of pastoral land. However in arid areas, poison baiting is not usually cost-effective and landholders are more likely to benefit from strategic warren ripping programs2.

The two most common poisons used to control rabbits in Australia are sodium monofluoroacetate (compound 1080) and pindone. Poison and chemical use is managed by state and territory authorities, and purchase, handling and use restrictions usually apply. It is important to assess the site and situation, and check with local pest authorities before starting a poison baiting program.

Free feeding is an essential part of a ground baiting campaign.

Compound 1080 is a single dose, naturally-occurring compound produced by many Australian plants. It is an odourless, tasteless, white fluffy powder that is usually dissolved in water to make a 1.5% solution. In the field, 1080 is mixed with bait material (ie oats or chopped carrot) that results in a low concentration of the active ingredient. The bait is usually dyed blue (or green) to give it a unique appearance and avoid accidental misuse, and to reduce its attractiveness to birds3. 1080 is a Schedule 7 poison and is subject to state and territory regulations, which restrict its availability, possession, storage and use. When used in conjunction with other control techniques, 1080 is a relatively cheap and effective poison for killing rabbits. 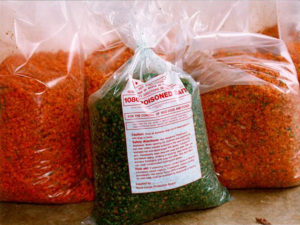 Pindone is a first generation (ie multiple dose) anticoagulant rodenticide used to control rabbits. Pindone is more effective when a series of smaller doses are taken over a period of 4-12 days, although it is possible for rabbits to die from an acute poisoning after a large, single intake4.

Pindone comes in two forms of concentrate products: a salt (pindone sodium salt) and a liquid (pindone acid), which are applied to bait material (ie oats or chopped carrot). Concentrate products can generally only be used by authorised persons. However pindone is a Schedule 6 poison, which can be purchased off the shelf as a ready to use bait product (eg Rabbait®), and stored and used as required. Pindone is relatively expensive, compared to 1080. It is typically used in populated areas such as urban and semi-rural areas (eg hobby farms, golf courses) where 1080 use is impractical or restricted.

Poison baits are usually applied using a baitlayer towed by a four-wheel drive or all-terrain vehicle, by hand (ground baiting) and by aircraft (aerial baiting)5. Aerial baiting is more effective for broadscale rabbit control but is less accurate and may present unacceptable risk to non-target animals in or near the treatment area. Baitlayers dispense bait along a shallow furrow or trail through the main areas of rabbit activity. The choice of method and poison depends on the location and area to be treated, the terrain, costs and equipment availability1.

The right amount of bait is needed for effective control and to minimise non-target impacts. In order to kill the highest possible percentage, rabbits also need to become accustomed to eating baits.

This is done by free feeding, where unpoisoned bait is laid out on two or more occasions over a period of 7—10 days, prior to laying poison bait. (Note: prebaiting is not required when using the one-shot oats technique in Western Australia6). The amount of free feed left after the final night provides an indication of how much poisoned bait will be needed.

When carrying out a ground baiting program3:

Warrens, rabbit-prone areas and the bait trails should be monitored after poison baiting so that any dead rabbits can be collected and disposed of. Rabbit density and damage estimates should also be monitored before and after poisoning, to determine the effectiveness of the program. A successful baiting program should kill 95% of the rabbit population1.

Baiting is recommended during late summer/early autumn when alternative feed is scarce and rabbits are under stress. During the breeding season (usually spring), juveniles all too frequently survive if they are too young to be feed on the poison trail. Young rabbits only 14 days old can survive the death of their mother.

It is recommended that bait is distributed in the evening to minimise its availability to non-target animals and to ensure overnight consumption by rabbits, although this can increase labour costs.

While there are some species that are not affected by 1080 (eg native species from Western Australia where 1080 occurs naturally in some native plants), there are others that are sensitive to its affects. Rabbits, dogs and foxes are highly vulnerable to 1080, while humans, sheep, cattle and possums are also susceptible. Animals that eat poisoned baits are at risk of primary poisoning but predatory or scavenging species may be affected by secondary poisoning (ie after feeding on a dead poisoned rabbit)7. There is no effective antidote for 1080, which is one of the reasons why 1080 baiting is not allowed in some areas (eg close to dwellings or waterways).

Rabbits are also highly vulnerable to pindone however dogs, sheep, cattle and people are fairly tolerant to it1. Vitamin K (phytomenadione) is an effective antidote. There is a low risk of secondary poisoning from pindone and generally most poisonings can be avoided if the bait is prepared and applied according to the appropriate instructions. The amount of toxin applied to bait has been calculated to ensure that most rabbits are killed, but where possible, risks to other species are minimized.

The choice of bait material is also important. Carrots may be used, but tend to deteriorate more rapidly than oats2. Oat grain is specifically chosen because 1080 can be applied to the husk alone and many seed-eating birds discard the husks, further reducing risk. A thinly laid trail of oats at recommended rates allows rabbits to readily take in a lethal dose of poison. But for large animals like kangaroos and wombats, there is little benefit in trying to glean individual seed grains from the trail. So although these non-target species may eat some bait, they are unlikely to take in a lethal dose.

A strategic approach to managing rabbits will typically involve poison baiting as the first step. It is a useful, cost-effective method for reducing rabbit numbers prior to warren destruction. There are different toxins available for use in different areas; however the most commonly used is 1080 oat baits. Before introducing the poisoned bait, it is important to encourage all rabbits to feed on the trail by free-feeding. Successful baiting programs should aim to kill 95% of the rabbit population1,2. It is also important to remember that rabbit control is only one aspect of natural resource management – ongoing pest and weed management in conjunction with neighbouring properties is vital to ensure long-term conservation and production benefits.