Economic and environmental impacts of rabbits in Australia

The European rabbit (Oryctolagus cuniculus) is a serious environmental and agricultural pest throughout Australia. Rabbits can have considerable impacts on farm productivity and native ecosystems, leading to financial loss and environmental devastation1. The community also suffers indirectly, as they might pay higher prices for rabbit-affected commodities (such as wool)2 or bear the loss of ecosystem services at the catchment scale3. Many of these costs cannot be accurately estimated in a financial sense. Where estimates have been calculated, assumptions and figures vary and are highly conservative2,4,5.

Competition and land degradation by rabbits is listed as a key threatening process in Australia4. Rabbits can cause damage by:

All of these impacts eventually lead to higher management costs7, loss of productivity6,8, and huge financial losses for Australia’s farmers9, as well as other land managers (eg national parks)7.

Although biological controls (myxoma virus and rabbit haemorrhagic disease virus, or RHDV) have provided ongoing rabbit control for over 60 years with little cost10, they have not eliminated the problem4. The overall loss caused by rabbits to agriculture and horticulture in Australia was recently estimated to be about $206 million per year11.

Management costs and loss of production 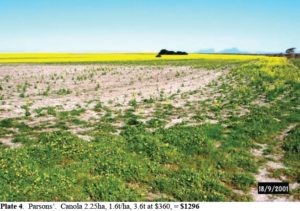 Rabbit damage and control costs at the property level vary depending on the land use or enterprise, climate and rainfall, and control methods used1, 5 (see table). The cost per rabbit also varies depending on the value of the affected commodity (eg crop type). For example, rabbit damage to high-value crops such as canola might be more financially devastating than damage to lower-value crops (eg lupins, barley), which generate lower returns per hectare12 (Figure 1). The return on investment in rabbit control is greater when high-value commodities or resources are protected from damage.

While the initial costs of rabbit control can be high (eg warren ripping costs are about $10–$20 per warren10), the benefits can be long term. Often costs can be recouped by added livestock or crop production, or minimised by being shared among neighbouring properties using a coordinated approach1. Taking no action against rabbits is likely to result in higher costs in terms of lost production and ongoing damage5.

An estimate of the costs of rabbits to agricultural enterprises*

*Production costs, grazing pressure (DSE) and value of product where applicable were taken into account. Adapted from DPI&F (2005)5.

For a wool producer, the cost of grazing competition between sheep and rabbits is a major cost typically measured in terms of dry sheep equivalents (DSEs). In general, about 16 rabbits/ha is equivalent to one DSE, or about 12 rabbits per DSE in higher-rainfall areas1,2. For example, if one sheep is conservatively considered the grazing equivalent of one warren of 12–16 rabbits14, a paddock containing 500 warrens is already bearing the equivalent of 500 grazing sheep, before the paddock is even stocked. 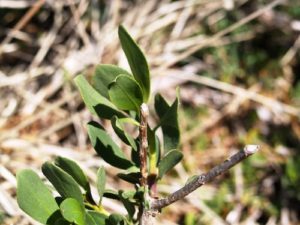 Rabbits also cause extensive losses to forestry and are a potential threat to new tree plantations designed for carbon offset or sequestration benefits1,15. They can graze plants to ground level, preventing regeneration and limiting seedling establishment1. The cost of tree planting programs is often increased because of the need to erect tree guards. In forestry plantations, damage from browsing rabbits can equate to one year’s loss of growth — up to $800/ha at clear-felling. In private forests, rabbit control costs can be as high as $80/ha when trees are vulnerable to damage1.

Low-density rabbit populations can cause significant damage to native plants and pastures, suggesting there might be no ‘safe’ level of rabbit density16 (Figure 2). It takes less than one rabbit per hectare to prevent the successful regeneration of many native trees and shrubs16, which are vital for biodiversity and farm productivity. Removal or loss of vegetation makes soils prone to wind and water erosion (Figure 3), which on farms can lead to reduced soil fertility and siltation of dams1,3. These impacts are intensified and particularly evident during and after droughts4. 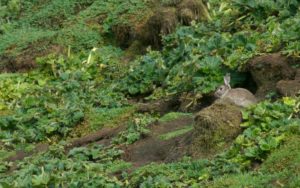 With declining populations of many small Australian mammal species over the past 200 years, it is possible that rabbits have partially filled an ecological niche3. Rabbit warrens provide refuge for some native species such as echidnas and large reptiles3. However, cats and foxes also use rabbit warrens for shelter and dens for their young, thus helping these predators to persist in hot, arid areas3. Rabbits also eat and disperse viable native plant seeds, performing an important function in the ecosystem3. However, they can also spread weeds and permanently damage native seedlings in the process2,16.

Rabbits as a resource

Rabbits are a commercial resource that provides employment and income, mainly in rural areas9. Wild rabbits are harvested to supply meat for the game and pet meat industries, and skins for the felt hat industry1,4 (Figure 4). Rabbit meat is considered a high-value gourmet product, although the market price depends on consumer acceptance and demand4. Indigenous Australians and recreational hunters also use rabbits as a food source9.

Before RHDV became established, the value of the wild rabbit industry was estimated at about $10 million per year17.  The farmed rabbit industry now dominates the supply of rabbits for domestic and overseas consumption, leading to a steady decline in the commercial harvest of wild rabbits9. Although these trades have suffered as a result of fewer rabbits post-RHDV, the benefits of rabbit control to agriculture and the environment far outweigh these losses17. 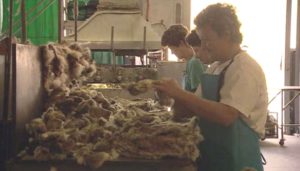 Before the release of RHDV, rabbit-induced production losses in the Australian wool industry were about $130 million per year11. It was estimated that reduced rabbit populations as a result of RHDV would increase agricultural production by $600 million annually, including about $300 million for the wool sector, $150 million for cattle, $80 million for cropping and $70 million for sheep meat17. Recent estimates have valued the cumulative benefit of myxomatosis and RHDV to Australia’s pastoral industries at about $96 billion over the last 60 years10. Although RHDV has effectively reduced the impact of rabbits across many parts of Australia, it is unlikely to keep populations down over the long term18,13.

Rabbit populations are now on the rise, potentially putting Australia’s growing carbon-offset industry and agricultural sectors at risk. Because of the high fecundity of rabbits and the damage likely to be caused by subsequent generations7, on-ground management actions — in conjunction with biocontrol — are expected to provide substantial benefits to primary production and biodiversity. The impact of rabbits on agriculture and conservation will continue to grow, unless continuous effort is put into long-term, integrated rabbit control.