This first step is most important in developing an effective fox  management program. You need to identify what the problem is,  where it is, where it comes from, who has the problem, when it occurs, will it change over time, how severe it is and what needs to  be achieved to solve it. It is also important to identify and include all the people and  agencies that should be involved. This means the problem can be  defined from different perspectives, which will assist your group to  set agreed goals and help develop a truly community-driven action  plan.

To determine the extent of fox predation, it is necessary to establish  that the fox is the major cause of loss. Other predators, such as feral  cats, wild dogs / dingoes or feral pigs may also be present, so it’s important to rule out their involvement. As the fox hunts mostly at  night, direct observations of them killing is difficult, so you need to  rely on other signs of fox involvement.

Fox paw prints can be used to identify their presence, and are easily distinguished from those of dogs or other predators – a foxes’ pads can be separated by a straight line as shown (see Figure, right). Examination of dead animal carcasses (if present) can also help in  determining the cause of death, and if predation was involved. The chart below illustrates a decision tree for determining the cause of lamb deaths. 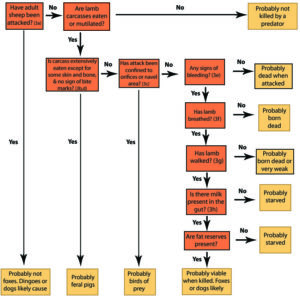 Decision tree for determining the cause of lamb death. Notes in brackets refer to photos on page 11. (after Agriculture Protection Board, Western Australia 1990. Foxes. Infonote 3/85, Edn 1.4, March 1990.)

Was the lamb alive when attacked?  Attacks on live animals result in bleeding at the wound site, with subsequent clotting forming dark  haemorrhagic areas (Figure 3e). Dead animals do not bleed. This can  be helpful to identify if predation occurred, or merely scavenging on  animals which had died from other causes.

What species of animal was responsible for the predation? Birds of  prey usually feed on the upper side of the lamb body only,  concentrating on the eyes, nose, mouth, navel and anus (Figure 3c). Attacks by mammals involve biting, often with matching punctures  on opposite sides of the limbs or trunk. Foxes and dogs typically  attack around the neck and muzzle area. The neck may be crushed,  or the muzzle mutilated or bitten off. Puncture marks can be used to  differentiate dog attacks from foxes as the latter has a very slender  jaw, with the canine teeth closer together. Bite marks are best  observed by skinning the carcass (Figure 3d). Extensive mutilation and consumption of the lamb carcass, including bones may indicate  feral pig predation (Figure 3b). This can be confirmed by the lack of  canine puncture marks.

Even though dogs and foxes are capable of consuming most of the  carcass, foxes especially tend to eat the tongue and organs first.  Attacks by foxes and dogs are often characterised by a large number of lambs killed (surplus killing) in one night. Foxes generally do not  attack and mutilate adult sheep (Figure 3a).

If alive, was the lamb sick or healthy?  Lambs are born with protective, soft membranes covering the sole of their hooves which  is quickly worn when they begin to walk (Figure 3g). An intact sole  membrane indicates they did not successfully walk. Examination of the lungs will show a clear difference between successful breathing  (light pink) compared to lungs which have not been properly aerated (dark and liverish in colour) (Figure 3f). When a lamb fails to feed  properly the fat reserves around the heart and kidneys becomes  soft, gelatinous and dark plum red in colour. In healthy lambs this fat  is firm, white and lacking obvious blood vessels. Successful feeding is  also indicated by milk in the stomach and gut (Figure 3h).