Distribution of pure dingoes and dingo-dog hybrids in Australia

The term ‘wild dog’ collectively refers to dingoes, feral domestic dogs and hybrids between the two. All of these are classified as the same species, Canis familiaris. 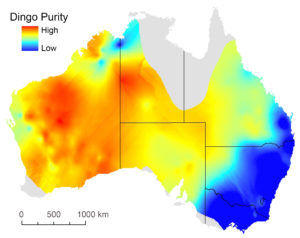 Figure 1: The distribution of pure dingoes and dingo-dog hybrids in mainland Australia

Since the early days of European settlement of Australia, domestic dogs have been interbreeding with ‘pure’ dingoes to create hybrids or crossbreds. The impact that this interbreeding may have on ecological processes is unknown, but hybrids are considered to pose a genetic threat to the unique identity of the Australian dingo. Knowing where the most pure populations of dingoes remain can help managers conserve these dingoes’ genetic integrity.

The colour of a wild dog’s pelt is not a very useful indicator of genetic purity. Pure dingoes are not always the typical yellow colour most people associate them with, and hybrids can often have this typical yellow colouring. Characteristics besides coat colour are needed to determine whether or not a wild dog is a pure bred dingo or a hybrid.

DNA testing can be used to determine the purity level of a wild dog. By taking a piece of ear tissue, a cheek swab or some hair from a wild dog, geneticists can analyse a number of specific ‘markers’ (small pieces of the animal’s total DNA) that are known to be different between dogs and dingoes. A free-roaming wild dog might have all dingo-like DNA or a mixture of dingo and domestic dog DNA. Very few domestic dogs (such as escaped pets or working dogs) are found in the wild on the mainland.

Figure 2: Proportion (%) of dingoes and hybrids in each State / Territory

Recent results from 3637 wild dog DNA samples from across Australia have shown that the percentage of hybrids in the wild is generally higher in areas with large human populations, such as New South Wales and Victoria. More remote areas inland and to the west have higher levels of dingo purity, with 87% of wild dogs tested in the Northern Territory being pure dingoes.

Since domestic dogs arrived in Australia, interbreeding between dogs and dingoes has progressed rapidly. Understanding which areas have pure dingoes and which have hybrids is important for dingo conservation and for understanding the ecology of wild dogs in Australia’s ecosystems.